Book Blurbs for Speak Softly and Carry a Big Stick 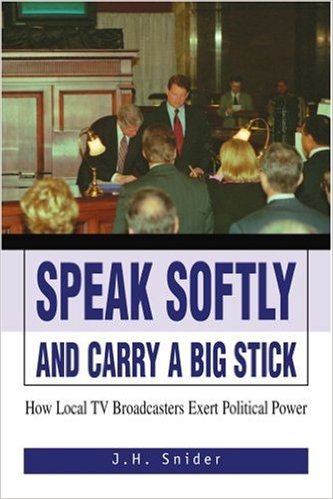 “Broadcasters have always been coddled by politicians, and Speak Softly explains how and why.  J.H. Snider tells the story with the rigor of a scholar, the doggedness of an investigative reporter and the zeal of a reformer.”

“J.H. Snider offers an extremely comprehensive and well-documented look ‘behind the curtain’ at how the National Association of Broadcasters drives its national legislative agenda. This is must reading for not only political scientists but for all who are interested in media policy and how it gets made in Washington.”

“This astute book is a first-rate work of original scholarship. It also provides an unsettling description of broadcasters’ policy influence. When their own interests are involved, broadcasters cannot be trusted to act in the way they demand of all others in society. Readers will no doubt question whether J.H. Snider’s recommended solution is a practical one. But no reader will question his call for new measures.”

“Having played a role in the mad-cap drama of telecommunications legislation Snider documents, I can tell you he has captured the essence of the machinations, strange bedfellows, and almost single-minded, righteous self-interest that drives the telecommunications debate. Like it or not, this is how the power game is really played.”

“Speak Softly documents the broadcast industry’s striking influence on public policy, including the landmark Telecommunications Act of 1996. As Congress gears up to re-write the Act, J.H. Snider’s analysis is particularly timely.”

“This is a theoretically rigorous and meticulously researched examination of the growing conflicts of interest embedded in our communications policymakers and the media institutions that cover them. Snider’s documentation of the various means by which broadcasters can influence policymakers — and the extent to which they use such influence — on behalf of their own economic self-interest is a wake-up call to any citizen concerned about the future of our media system and our democracy.”

“This lucid work, based on extensive research and insightful analysis, demonstrates the “low visibility” but effective influence local TV stations have to promote their industry interests at the expense of the public interest; it illustrates this with the 1996 Congressional spectrum “giveaway” to the broadcasters and shows the damage to the nation.”

“This is an indispensable resource for anyone seeking to understand the mechanics of broadcaster bias in the mass-media age.  J.H. Snider peers into the files of powerful corporate lobbyists in Washington to shed light on one of the worst cases of industry-government collusion in the last twenty years, involving the wholesale handover to private interests of one of the American public’s most valuable assets — the broadcast spectrum.”

“A fascinating and perceptive look at the politics behind the biggest grant of public property to private parties in the 20th Century.”

“A meticulously researched case study illustrating why ‘public interest’ regulation of local TV broadcasting has been a cruel charade.”

“J.H. Snider lifts up the veil of secrecy to reveal the inner workings of one of the most powerful political lobbying groups in the U.S.  Through ground-breaking research, this book documents how the National Association of Broadcasters and local TV station owners have set the policy agenda for Congress and the FCC.  “Speak Softly” will become the key source for those who desire to understand how decisions about TV and spectrum policy are really made in Washington.  An important contribution to our understanding of the critical issues affecting the future of U.S. media and our democracy.”

“This book marks a major conceptual advance in the surprisingly under-developed study of media bias.  Deploying sophisticated analyses that draw widely from sources as diverse as public choice theory and Plato, J.H. Snider demonstrates the implausibility of broadcast news organizations’ claims to act consistently as agents guarding the public’s interest in responsive, democratic government.  Instead he shows how when it comes to public policy decisions that directly affect them, broadcasters–quite rationally and predictably–use their control over news coverage, and thus their power over politicians, to advance their own welfare at the expense of the public’s. Scholars and citizens concerned with the clash between democratic ideals and political realities, and those seeking to understand the dilemmas that confront the news business in an era of growing market-driven pressures upon journalistic ideals, should read this important book.”

“In a democracy, public policies toward the media carry unusual importance, since they shape the amount and direction of information on which the people make their decisions. J.H. Snider’s diligent research and keen intelligence has produced one of the most revealing studies of this poorly understood but vital topic. By examining the remarkably secretive but powerful lobby, the National Association of Broadcasters, and how it worked to ensure that the Telecommunication Act of 1996 gave sweeping grants of free television spectrum to local stations, Snider has given us a eye-opening and indispensable account of how and why the media do what they do.”

“J.H. Snider’s Speak Softly and Carry a Big Stick is one of the most important books on media policy and governance that I have read in years. With rare thoughtfulness, Snider combines a rigorous and detailed examination of how policy making works in the United States with a provocative and intellectually imaginative proposal for reform. This book not only deserves, it demands, the attention of policy makers and concerned citizens who wish to see a free press and a free society.”

—Robert W. McChesney, Professor and Author,
The Problem of the Media

“A thorough and insightful look at the subtle ways in which TV broadcasters exert a great deal of political power.”

“J.H. Snider’s book provides a well-reasoned case for the view that broadcasters’ wield undue political influence over communications policy in the United States.  His in-depth theoretical and empirical substantiation of his arguments make this important reading for practitioners and academics involved on all sides of the debate over broadcast regulation, spectrum policy, and media bias.”

“Speak Softly and Carry A Big Stick, by J.H. Snider, addresses an important and understudied aspect of Washington politics: the formidable influence wielded by television broadcasters on public policy and public perception—with consequences worth tens of billions of dollars.  Snider, a nationally recognized expert on telecommunications policy trained in political science, has written an elegant,  well-informed, and well-documented account of the often hidden influence of television broadcasters not only over communications policy that affect virtually all Americans, but on the quality and fundamental fairness of electoral democracy itself.  Here is a political scientist who deals directly with the logic and reality of political power in the nation’s capital.”

—Bartholomew Sparrow, Professor of Government,
University of Texas at Austin

“I should put Speak Softly on my resume.”

“The regime adopted to regulate radio broadcasting in 1927 is still, waves of technology later, with us today.  The political stability of this regulatory structure is not well understood, however, and it confuses much analysis in telecommunications policy.  J.H. Snider’s ambitious book offers fascinating detail of the relationship between interests and outcomes, free speech and spectrum allocation.  This research constitutes an impressive advance in our study of American media and the institutions that govern them.”

“Local TV stations’ Washington lobbyists prefer their tactics to be essentially invisible to public scrutiny, so they won’t like ‘Speak Softly.’  But you will–if you care about the accountability of media power.”

“Snider looks at a media bias that is neither right nor left, but is rather a fundamental struggle of special interests versus public interests. Speak Softly is required reading for those interested in tuning in to the debate over how spectrum is allocated by the government and manipulated by the broadcast industry.”

“These issues are among the most important policy issues understood not at all by policy makers. This is
the very best policy work I’ve seen addressing them.”

“One of the most entertaining and engaging ‘Watchers of Spectrum Issues’ is J.H. Snider….  Why do broadcasters have the reputation for being one of the most powerful lobbies in Washington? What implications does this have for spectrum policy? What is going on with DTV legislation on the Hill and at the FCC?….  If you want an inside look into how things work and what to anticipate, [Speak Softly] is the book to read.”

“The story of how broadcasters have amassed their political power, and how they routinely exercise it against the public interest, is a story that greatly needs to be told. Fortunately, J.H. Snider of the New American Foundation has done so in an excellent new book, Speak Softly and Carry a Big Stick: How Local TV Broadcasters Exert Political Power (iUniverse)…. ‘The distinctive genius of the local TV broadcast industry lobby,’ Snider writes, ‘is that it carries an extremely powerful stick – control of the most influential public affairs medium in America – yet when lobbying for its industry interests, can wield that resource without leaving a verifiable trace.’  At 619 pages, Snider’s book may be intimidating to some readers. The length stems from Snider’s rigorous scholarship and detail, however, and is fully justified.“