The current focus of this project is to encourage Maryland’s Governor and General Assembly to convene the constitutional convention that a majority of Maryland voters voted for on November 2, 2010. For additional details, see Marylanders for a State Constitutional Convention at www.MarylandConCon.org.

Snider, J.H., State ignores voters on constitutional convention; Majority voted in favor of con-con in 2010, yet it hasn’t been convened, Baltimore Sun, January 19, 2012.

Snider, J.H., The road to term limits in Maryland: A constitutional convention is the state’s best chance for reform, Baltimore Sun, September 22, 2010.

The most prominent political leaders to support citizens assemblies have come out of Canada, New Zealand, the United Kingdom, the Netherlands, and Ireland. iSolon.org has not necessarily supported any of these initiatives, but it has sought to track them and analyze their strengths and weaknesses from the standpoints of democratic theory and real world practicality.

For a compendium and up-to-date list of popular articles on such innovations, subscribe to iSolon.org’s Constitutional Convention and Citizens Assembly Based Democratic Reform Facebook group.  The current primary focus of the group is on the yearlong constitutional convention convened in Ireland on December 1, 2012.  Two-thirds of the members of the convention were randomly selected from the general citizenry. 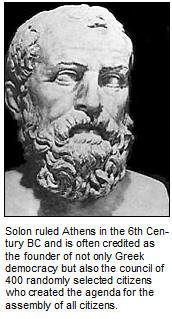 iSolon.org views citizens assemblies as a small part of a much larger set of innovations it calls “electoral reform juries.”

For one presentation of this conceptual framework, see J.H. Snider’s If Men Were Angels….: Should the Checks & Balances System Include Electoral Reform Juries?, a working paper presented at the Annual Meeting of the American Political Science Association, September 5, 2009. J.H. Snider’s redistricting jury proposal was featured at a May 4, 2009 conference co-sponsored by iSolon.org and the Hudson Institute.

Much of the recent interest in citizens assembly based democratic reform has been driven by the observation that incumbent lawmakers have an inherent conflict of interest in passing electoral reforms that have a direct bearing on their re-election prospects. The citizens assembly, which is democratically representative of the general population but is chosen by lot rather than election, holds the promise of avoiding this type of conflict of interest

iSolon.org knows there are many other efforts, including deliberative opinion polls and citizen juries (as well as conventional judicial juries), to use randomly selected bodies of citizens for democratic purposes. But it reserves the term electoral reform jury and its variants to randomly selected bodies with official government powers and with a jurisdiction limited to democratic reform; that is, to areas where elected officials have a direct conflict of interest.

If Men Were Angels….: Should the Checks & Balances System Include Electoral Reform Juries?
(working paper presented at the Representation and Electoral Systems Division’s theme panel, Citizens’ Assemblies and Deliberative Democracy, at the Annual Meeting of the American Political Science Association, Toronto, Canada, September 5, 2009).

The Case for Redistricting Juries: Lessons from British Columbia’s Revolutionary Experiment in Democratic Reform
(working paper presented at a conference cosponsored by the Hudson Institute and iSolon.org on May 4, 2009; the APSA working paper above provides a more up-to-date and rigorous treatment of the same subject).

“This is the best source for up to date information and commentary about one of the most important institutional innovations in modern democracy.”

If Men Were Angels….: Should the Checks & Balances System Include Electoral Reform Juries?
(working paper presented at the Representation and Electoral Systems Division’s theme panel, Citizens’ Assemblies and Deliberative Democracy, at the Annual Meeting of the American Political Science Association, Toronto, Canada, September 5, 2009).

Canada Steps on the World Stage as a Democratic Reformer
(concluding remarks at the Harvard University Canada Program’s conference on democratic deficits and citizens assemblies, May 8-10, 2008, published in the Journal of Public Deliberation, May 2008)

Designing Deliberative Democracy (Cambridge University Press, 2008)
(review of the first major book to be written about citizens assemblies, published in theJournal of Public Deliberation, May 2008)

During the second half of the 2000s, iSolon.org’s Electoral Reform Project reported on citizens assembly developments throughout the world. Those who wanted news of citizens assembly developments could subscribe to the free Citizens Assembly News Digest,which was emailed to democratic reform activists and scholars in more than a dozen countries. This Digest was generally sent out several times a year.

Reporting on Citizens Assembly developments was a joint project with iSolon.org’s readers. iSolon.org carefully monitored the print press and blogosphere for reports on citizen assemblies, but also got much of its most valuable information from its readers.

(The Citizens Assembly News Digest was superceded by the Facebook group below).

To Subscribe or Unsubscribe to the Citizens Assembly News Digest

To unsubscribe from the Citizens Assembly News Digest, please send an
email to CitizensAssembly@iSolon.org with the word “unsubscribe” in the
subject line.

External Resources
(this has not been maintained since summer 2008)